Part 1 presented an overview of Israel’s antimissile defence systems, including the Iron Dome, David’s Sling and Arrow 2 and 3. Part 2 tells the story of Iron Dome, starting with how it works.

During the November 2012 attacks on Israel, Hamas used home-made Qassam rockets to target southern Israel and Iranian Fajr-5 rockets to target Tel Aviv and Jerusalem. Figure 4 shows an Iron Dome battery firing a missile to intercept an incoming enemy missile. It is easy to see how close to the main population centres the battery is deployed, with the missile warfare being fought over the skies of the Israeli cities.

The Iron Dome antimissile defence system is made up of three main subsystems:

–          Detection and Tracking Radar (DTR) made by ELTA based in Ashdod. This is the eyes and ears of Iron Dome. It detects incoming rockets and missiles and passes key information about their trajectory to the next subsystem.

–          Battle Management and Control (BMC), developed by mPrest Systems, is the brain of Iron Dome. It is a software subsystem running on military-grade computers which calculates the impact point of the incoming missile and decides whether it constitutes a threat to a designated area, such as a population centre. If it is likely to constitute a danger then it takes action to intercept the incoming missile.

–          Missile Firing Unit (MFU) developed by Rafael is the iron fist of the Iron Dome. Under the control of the BMC it fires its intercept missile, called Tamir, to destroy the incoming missile.

A Wireless Communications System connects the three main subsystems to each other.

The main contractor for the whole project is Rafael which can be found on your left as you leave Haifa towards Akko on the main road.

During the November 2012 conflict, Hamas fired 2000 rockets at Israel, some of which penetrated and caused damage, including a few fatalities. Of these 2000 incoming missiles, around 420 were deemed to be dangerous and 84% were intercepted successfully. Why doesn’t the system intercept all incoming missiles? Why does it select which ones to intercept and which ones not? In order to answer this question we need to understand the economics of this warfare.

Iron Dome has been described as hitting a bullet with a golden bullet. Each Qassam rocket is estimated to cost around $500 (certainly less than $1000) to make and launch; the Fajr-5s from Iran are considerably more expensive and accurate than the Qassam. On the other hand, each Iron Dome missile costs something in the region of $40,000 to $50,000. It is not difficult to see that if Israel were to attempt to intercept every incoming missile it would soon become extremely costly. That is why the system has to be intelligent in deciding which incoming missiles to engage, thus keeping the operational costs down. 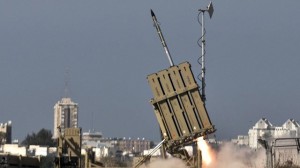 There is no doubt that, to date, Iron Dome has been an unqualified success and wonderfully showcases Israel’s superior technology, even more so because only six years ago the American experts were claiming that it could not be done.

The first Israeli studies into antimissile defence systems started in 2004 under the leadership of Brig. Gen. Dr Daniel Gold, Head of Research and Development, Israel Ministry of Defense and Israel Defense Forces. After analysing two competing technologies from the US and rejecting them, Dr Gold’s team drew up the first blueprint for Iron Dome in collaboration with the Israeli Defence industry participants. In 2005 Dr Gold asked Rafael to become the prime contractor and decided to commit $5M from his research budget if Rafael matched it, which they did. At this point no government money had been committed to this project and plenty of people in the military were convinced that it would not work.

Dr Gold was later criticised by auditors for starting an unauthorised project, but he and his team pressed on regardless. In 2006, having been subjected to nearly 5000 Hezbollah rockets fired from Lebanon towards its northern cities, the  Israeli government started to take antimissile systems seriously but still no new funds were forthcoming.  Dr Gold believed that an operational system would be needed within the next five years, and accelerated the programme despite the lack of financial support from Ehud Olmert’s government.

Finally, in 2007, the formal ‘go ahead’ was given for the development of the Iron Dome system, thanks to the support of the then Defence Minister, Amir Peretz, and $10M of government funds were given to the project. It was soon evident that to complete the project and deploy a sensible number of batteries would cost between $500M and $1B and the government approached the Americans for financial support.  The Americans sent an expert team to Israel to review the project; their report was damning, saying that Israel was wasting its money and should buy into an existing American system that Dr Gold’s team had already investigated and rejected.

By the end of 2007 the Israeli government was becoming more supportive and committed $200M to the project. The Iron Dome project was making rapid progress, and some veteran engineers were even called out of retirement to help with design and development. A significant turning point came with the election of President Obama in 2009. He believed in bolstering Israel’s defences in order to pave the way for a political settlement. To this end he favoured supporting projects such as Iron Dome. The Americans carried out another review of the project, and the progress made in the past two years convinced them that the Israelis could pull it off, as a result of which the US government contributed $200M to the project.

The first Iron Dome Battery went live in March 2011 near Beersheba and started shooting down missiles from Gaza almost straight away. As of April 2013, five batteries are operational, near Beersheba, Ashdod, Ashkelon, Netivot (between Beersheba and Gaza) and Tel Aviv. The government is looking to commit another $200M in order to deploy three more batteries and the military think that they need 13 batteries in all to defend the whole country from short-range missiles.

Dr Daniel Gold, who can be called the father of Iron Dome, is now retired from IDF and works in the private sector. He and Amir Peretz are like celebrities in Israel, being recognised and acclaimed for their contributions to this incredible achievement.

So, has Israel found the perfect answer to deal with future threats to its security? Regrettably, the answer has got to be ‘No!’. Hezbollah and Hamas are believed to have an arsenal of 60,000 missiles.  The instability in Syria is making the widespread use of chemical weapons far more likely. A solution like Iron Dome buys Israel time and gives additional options but cannot provide a fail-safe security umbrella. An Israeli source commented “Our enemies will continue to improve their missile technology. We cannot stand still, we have to keep innovating to stay one step ahead. We will continue to seek peace from a position of strength”.

It is poignant that I have completed this article on the day we are celebrating the 65th Anniversary of the creation of the State of Israel. Israel will continue to exist and thrive, despite all the odds, thanks to the ingenuity and determination of our Israeli brothers and sisters.