A Celebration of 100 Remarkable Years 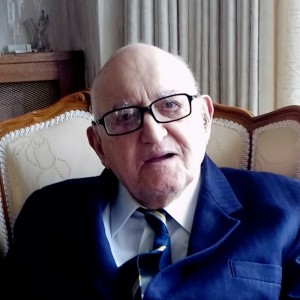 On 12 July we celebrate the 100th birthday of a remarkable man, our Senior Trustee, Harry Ellis. In the past few months I have had the good fortune to get to know Harry and to spend some time with him. Despite his failing eye sight he continues to serve the community by attending the Executive Committee meetings and by sharing his wisdom with the ‘youngsters’. He is humorous, quick witted and a most agreeable whisky drinking companion. Harry tells the story of an executive meeting during which John Kasmir remarked that there was a draught coming from the window. Harry replied ‘This year we have a draught, next year we will have an overdraft’.

Harry was born in 1916 in Newport in Wales to Lithuanian parents. After attending Newport High School he went to Cardiff University to study Law and qualified as a solicitor in May 1939 just a few months before the start of the War. In July 1939 he got his first job in Aberystwyth and later that year he got engaged to Amy Taylor from Bournemouth. In 1940 Harry moved to Bournemouth and married Amy at the BHC shul.  They went on to have one son, Jonathan.

Ever since joining BHC in 1940 Harry has been an integral part and a leader of our congregation. In 1947 he was elected treasurer as a young man aged just 31. He would go on to serve the community in various capacities for the next 70 years. Harry was first elected president in 1950, the year I was born, and he held this office on no less than 5 occasions. In 1965 he became a trustee of the congregation, an office he holds to this day.

Harry’s leadership qualities did not stop with the Bournemouth Hebrew Congregation. He encouraged, maintained and strengthened cordial relations with the non-Jewish community and was held in high esteem by them. In the early 1970s he was elected Vice President of the Bournemouth and District Incorporated Law Society, the first Jew to have held that office and went on to become the President of that society.

During his long service Harry also represented our congregation at the Chief Rabbinate Council and at the Board of Deputies. He served as executive member of the Council of Christians and Jews, as chairman of the Bournemouth Jewish Public Relations Committee and as chairman of the Hannah Levy Home Aid Committee, to name a few.

The cause that was particularly close to Harry’s heart was the Joint Palestine Appeal (JPA) the organisation which was the predecessor to the United Jewish Israel Appeal (UJIA). In the 1960s and 1970s Harry was the chairman of the Bournemouth JPA committee and worked tirelessly to promote Israel’s interests both politically and financially.

It is remarkable to think that for the past 70 years the history of Bournemouth Hebrew Congregation and the life stories of Harry Ellis and his dear wife Amy are so intertwined; you could not tell one without the other. On behalf of the Bournemouth Hebrew Congregation, the Executive would like to thank Harry for his many years of service to our community and our town and we wish him a hearty ‘Mazal Tov’ on his very special birthday.