As we have reported on over the last two years, early in 2020 a Strategy group was formed and we began to define a vision for the future of BHC, in the light of falling membership (members moving away or sadly passing away), and the need to respond to members’ appetite for more and different offerings.

We identified some key focus areas to drive increased membership, including:

We explored whether enough was being done to meet the needs of the wider community and, presuming we could address those needs, considered how we would communicate more effectively to a wider audience, and then attract those individuals, couples, and families to BHC.

We reached out to the community with the “BHC Community Survey” – completed by members and non-members, locals, and those further afield – the results of which supported our initial assumptions.

We soon realised that unless we became a more community focused, modern, vibrant organisation, we would not change the perceptions of BHC and attract the wider, local Jewish community.

With the agreement and active support of the Trustees and Board, we appointed an external Media & Marketing consultancy and set them the task to help us rebrand the organisation and develop a new website.

We agreed that it was important to avoid the clichéd symbology of many other Jewish organisations and congregations, such as a Menorah, Magen David, or Flame, but to seek a design that reflected both our Jewish tradition and had a unique identity, reflecting the distinctiveness and geography of Bournemouth.
Several ideas were presented and considered, but one design stood out strongly from the others. That design was built on and developed and, following sign-off, has resulted in a fabulous new logo, modern and striking branding and colour structure, and a wonderful new website.

The new Logo for BHC reflects both our geographic location and our need to both listen to our Community and Communicate. The traditional Jewish tool for Communication and symbol of our faith is the Shofar. The Shofar emits a glorious sound that was historically used for proclamation and coronation. Sages have also interpreted this sound to represent joy, hope and trust in the future.

The final exciting and innovative element to our new identity is the inclusion of the word Community in the brand name of BHC by introducing the branding Bournemouth Community Hebrew Congregation as our new operational name. 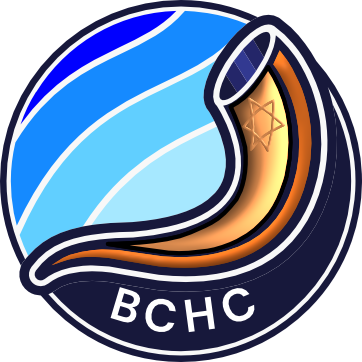